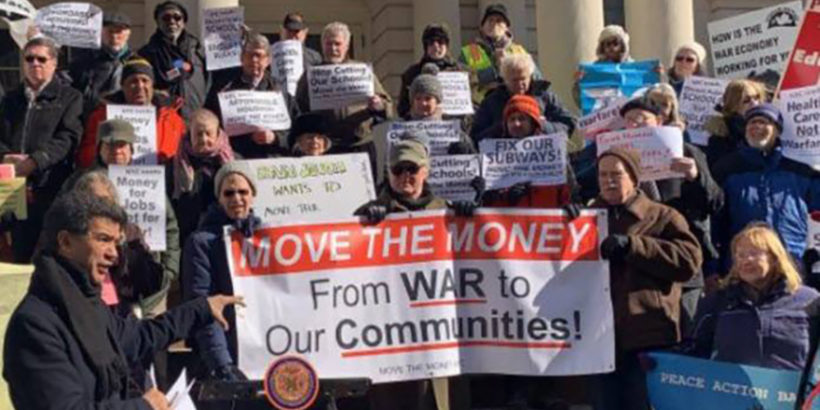 We are a coalition of over 50 New York City organizations — labor, peace, community, lay, civil rights, tenants — who have come together to urge passage of NYC Council Resolution, 747A.

The resolution was introduced in February 2019 by Councilmember Ydanis Rodriguez. Since then it has received the sponsorship of 17 or the Council’s 51 members.

MTM-NYC collected more than 3,000 postcards addressed by constituents to their Councilmembers, urging passage of the resolution.

If passed, it will put our city on the record opposing bloated Pentagon war budgets that rob the city of urgently-needed funds to carry on vital public programs: public education, mass transit, sanitation, affordable housing, health care—you name it. The resolution also mandates in-depth public hearings so that New Yorkers and the Council can now just how much money goes missing by the lopsided spending priorities in Congress.

We say MOVE THE MONEY…

FROM WAR TO OUR COMMUNITIES!

Resolution calling on the federal government and its legislators to move significant funds away from the military budget to fund human needs and services.  Introduced Feb. 2019

Whereas, spending on defense already makes up more than half of the federal discretionary budget and President Trump is seeking to increase this to 65 percent by 2023; and,

Whereas, this increase would be offset by cuts to social services, and New York City would lose at least $850 million under this budget shakeup; and,

Whereas, like other local governments, New York City’s ability to fund essential social services relies in part on federal grants; and,

Whereas, the City’s Department of Housing and Preservation, for example, is the largest municipal housing agency in the nation and currently 83 percent of its budget comes from federal funds; and,

Whereas, according to the New York City Comptroller, cuts to federal programs would directly impact the lives of New Yorkers because it would eliminate the Low-Income Home Energy Assistance program, which 770,000 New Yorkers rely on to keep their homes warm in the winter; and,

Whereas, the United States consistently outspends other countries on military and defense; and,

Whereas, in 2017 the country spent over $600 billion on the military, more than Japan, the United Kingdom, France, India, Saudi Arabia, Russia and China combined; and,

Whereas, polling has shown that constituents do not want increases in defense budgets, especially at the cost of social services; and,

Whereas, a poll by the University of Maryland’s Program for Public Consultation recently revealed that while President Trump wants to increase military spending by more than $52 million, those polled said they wanted to see the defense budget cut by $41 million; and,

Whereas, according to data from the National Priorities Project, taxpayers in New York City contributed more than $25 billion to the Department of Defense (‘DOD’) in 2017, but a small decrease in the military budget could provide a range of essential services for New Yorkers; and,

Whereas, reducing the DOD contribution by ten percent could fund healthcare for approximately 850,000 children from low-income families, medical care for nearly 200,000 veterans, stimulus to create more than 46,000 infrastructure jobs and 25,000 additional elementary school teachers jobs; and,

Whereas, in June 2017, the United States Conference of Mayors, including New York City Mayor Bill de Blasio, unanimously passed a resolution calling upon all cities to hold public hearings on the ways that the federal defense budget hampers local spending on essential social services; and,

Whereas, residents of New York City have a right to know and publicly comment on how their Whereas tax dollars are spent and which services they want funded and prioritized;

Whereas, local governments are the main victims of lopsided federal priorities embodied in a federal budget skewed to Pentagon spending; and,

Whereas, these municipalities could be much more fair and stronger if the federal government spent less on the military and instead utilized the money to improve transportation, education, housing, healthcare, environmental protection, and public goods and services; now, therefore, be it

Resolved, that the federal government and its legislators move significant funds away from the military budget to fund human needs and services.