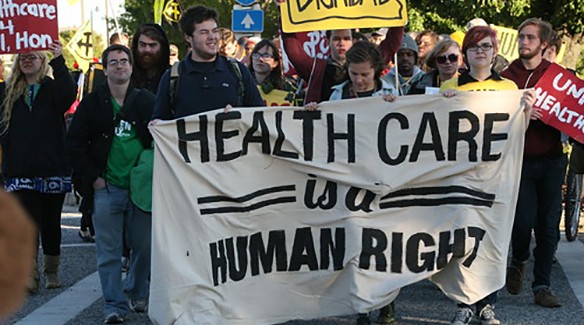 The uproar of the George Floyd phenomenon and the Coronavirus pandemonium demonstrate the urgency for some fundamental transformations in our nation. Lack of a universal healthcare plan is one issue brought into focus by these events. The main questions are:

Why is the U.S. – supposedly the wealthiest country in the world – the only major industrial country without a universal healthcare system?

Why does healthcare cost much more here than in any other country?

Why is the average individual’s health in our country, by many parameters, worse than in other industrial countries?

My answer from a previous OpEdNews essay on healthcare is:

“The reasons are obvious. In those other countries, social consciousness in government policy has evolved commensurate with progress in civilization to realize that healthcare coverage is a human right and necessity. In this respect (and others) we are a backward country. Why? Because our government has capitulated completely by giving priority in all matters to corporate interests motivated solely and amorally by profits.

One does not have to be a professional analyst to understand this quandary.

In this article, I will examine the issues by scrutinizing the bills from my health plan provider for two 3-day stays in the hospital involving a coronary stent procedure – the same procedure that Bernie Sanders experienced. I am not complaining about my co-pay costs, but a detailed review of the bills reveals deep flaws in the financial structure of our private healthcare system, reflecting a more widespread acceptance of arbitrary, absurd, and oftentimes purely fraudulent costs in the industrial/military complex and other sectors of our economy.

Here is a summary of events: In the Emergency Room, I was evaluated by X-Ray and cardiac monitoring, visited by two physicians and referred to hospital admission. However, because of the Covid-19 crisis, there was no bed available in the hospital, so I waited in bed, virtually unattended, in a small curtained cubicle all day – not a semi-private room – without food to be moved by ambulance to a sister hospital about 20 miles distant. There, I was evaluated and monitored for three days to determine whether to be treated with medicines or stent procedure, then released without treatment.

The next week was a repeat. I went to the local Emergency and, after waiting again in bed most of the day while arrangements were being made, was moved by ambulance to another sister hospital nearby. They performed the 1-1/2 hour stent procedure late that afternoon and kept me in the hospital three days for observation, during which time I was monitored and visited briefly by a doctor each day.

Now the bills to the medical plan:

For the local Emergency:

The standard emergency room cost, for which I signed, is $90 co-pay. I was billed $240, happily thinking it included all other co-pay costs. I was not charged the approximate $2,000 for ambulances.

About a month later I received a bill for events at the two sister hospitals: (Not shown here in full detail.)

I will “gladly” pay the $920 co-pay, but what worries me is the staggering charges which were approved by the medical plan or medicare to which I contribute. Aside from the $5,984 for the non-existent semi-private room in Emergency, some of these charges remind me of the infamous $700 cost of an ordinary hammer, described by another name, that was paid to a defense contractor, according to a senate investigation.

Of the 1-1/2 hour stent procedure at the above stated cost of roughly $90,000, cardiologist Dr. Mimi Guarneri, who now promotes healthy life styles as an alternative on her PBS TV presentations, has performed 700 of them in one year. That’s 2 or 3 per day – equal to a possible $270,000/day/per operating room to the hospital at the above rate.

If these charges by a highly respected hospital system are typical of medical costs throughout the labyrinth of our existing medical plans, then it is evident why a single payer universal medical plan is not feasible. The huge profits to investors in private insurance companies, hospitals, suppliers, pharmaceutical companies – and undoubtedly many extravagant salaries buried in these charges – would be lost to the private economy. No medical system dedicated to serving ethically the entire nation at affordable costs could sustain these mythical expenses unless they are reconciled with reality.

The public needs to know how other countries manage their universal health systems – how their costs compare with ours. We already know that prices of drugs in our country are highly manipulated. A sampling of drug pricing shows we may pay 6X or more for specific drugs than Canadians pay. https://www.drugwatch.com/featured/us-drug-prices-higher-vs-world/. Congress, at the bidding of the pharmaceutical industry, has forbidden competitive bidding for lower drug prices in the Medicare program. We need to know how much of the our health plan costs goes as profit to the insurance companies. Do private insurers have any role in universal health coverage of other countries?

As I pointed out in another article*, any government, to the extent it provides basic public services, is functioning partially as a socialistic economy. Affordable universal healthcare is conceivable only as a non-profit function of government as provider or manager. The healthcare profession, as a humanitarian mission, should be obligated to provide all necessary services at realistic costs to fulfill the needs of universal healthcare. Otherwise, the government itself would become the sole source for public health services by training and directly employing the necessary personnel, and by incorporating the necessary medical facilities into the program.

This would not necessarily eliminate private alternative or supplemental health insurance for those who can afford it.

* See “America Will Never Be a Socialist Country”.