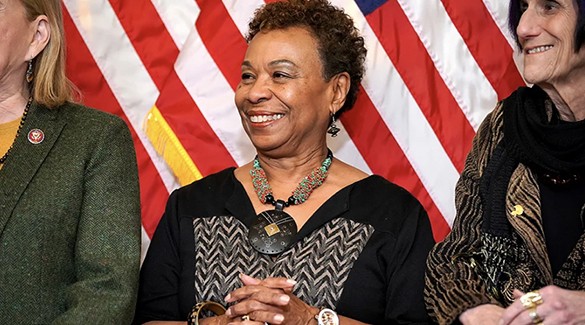 Since the start of the Trump Administration, defense spending has increased every year—over $100 billion, almost 20%, in three years. Now more than ever, in the middle of a global pandemic, we cannot allow this ballooning spending to be directed towards this president’s warmongering. Over 90,000 Americans have died from COVID-19, and we must focus our spending efforts on the expansion of testing, contact tracing, treatment, vaccine development, and relief for the people of this country. Last year’s NDAA authorized $738 billion in defense spending for FY20, while the Centers for Disease Control and Prevention (CDC) got 1/90th of that: less than $8 billion.

“Year after year, the Pentagon budget has inflated to historic levels while the vital needs of everyday people are left unmet,” said Congresswoman Lee. “The COVID pandemic has laid bare how America has failed to make its budgets reflect the real needs of our everyday families. It’s long past time that we address our bloated military budget and retarget resources towards policies and programs that matter the most for keeping us safe, healthy, and secure.”

“We are facing a crisis in this country and billions of dollars in defense spending increases won’t solve it,” said Congressman Pocan. “Year after year, we see taxpayer dollars line the pocket of defense contractors instead of supporting the American public. The enemy we’re fighting right now is COVID-19, so our sole focus should be on expanding testing, tracing and treatment, funding towards vaccine development, and relief for the American people. Increasing defense spending now would be a slap in the face to the families of over 90,000 Americans that have died from this virus.”

Last year’s House NDAA passed out of the House of Representatives in July with zero Republican votes and eight Democratic “NO” votes—both Pocan and Lee voted against last year’s defense spending increase. Republicans withstanding, 19 Democrats would need to vote “NO” this year for the bill to fail. 29 Democrats signed this letter.