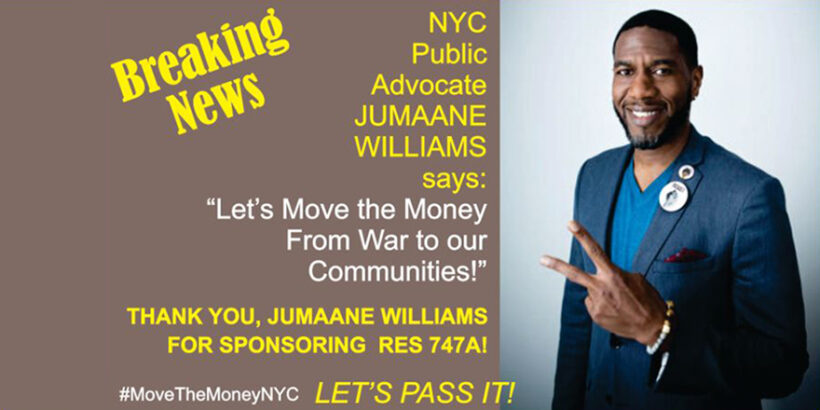 Dear Colleagues,
As we discuss the City budget for Fiscal Year 2022, I’d like to take the opportunity to ask you to join me, Public Advocate Jumaane Williams, and 18 other Council Members, as co-sponsors of Res. 747-A, calling on the federal government and its legislators to move significant funds away from the military budget to fund human needs and services and that in-depth public hearings are conducted on the dollar amounts that the City needs for essential services but that get diverted to the Pentagon.
In the United States, military spending makes up more than half of the federal discretionary budget. Last year, that figure was over $730 billion and represented more spending than that of Germany, the United Kingdom, France, India, Saudi Arabia, Russia and China combined.
Even worse than representing the greatest taxpayer’s investment in a nation with massive infrastructure and social services needs, the Pentagon is plagued by massive waste and mismanagement. The F-35 fighter jet fiasco is the latest scandal, one that will ultimately cost Americans over $1.6 trillion.
Poll after poll has indicated that Americans do not want more spending on military budgets, especially if they come at the cost of domestic spending. Yet, the current Senate just authorized $740.5 billion dollars to the Pentagon for this year and has given no indications to be contemplating reductions in the near future.
In 2020, the New York State Comptroller estimated that NYC taxpayers made a net contribution of $26.6 billion to the Federal government for the year 2018. Reducing the City’s Federal net contribution by a mere 10 percent would fund healthcare for over 800,000 children from low-income families, cover medical care for nearly 200,000 veterans, stimulate the economy to create over 45,000 infrastructure jobs and add an additional 25,000 elementary school teachers.
We have known this for decades: municipalities across the country have crumbling infrastructures, including deficient transportation systems, decaying public housing, and lack of protected bike lanes, among other inadequacies. Cities lack proper healthcare, housing, education, environmental protection policies, public goods and services. NYC tax contributions for the military should be invested in meeting the real needs of New Yorkers; including our NYC veterans, many of whom are in desperate need of resources such as housing and enhanced medical care.
What is new is that the COVID-19 crisis has compounded and exacerbated every social inequality in our nation and has hurt our economy in yet immeasurable ways. By very conservative and optimistic estimates, the Covid-19 crisis will cost our nation over $16 trillion, if it ends by next fall.
The impact to our working class has been enormous: concentrated in front-line jobs such as retail, transit, package delivery, and health care, our Black and Brown workers, exposed to the virus while lacking adequate health care, have sickened and died disproportionately. Now that there is a vaccine, vaccination efforts for communities of color are also lagging behind.
Today more than ever, we must fight to re-order national priorities. Our work is already bearing fruits: in July 2020, Reps. Barbara Lee and Mark Pocan set up the Defense Spending Reduction Caucus. It is a historic beginning.
Choosing to invest in the well-being of our people over more funding for an already bloated military budget is a civic and moral imperative. The United States Conference of Mayors (USCM) agrees and has long supported this Resolution.
The time to choose the future we deserve is now!
To sign onto this bill or if you have any questions, please contact my Legislative & Budget Director, Evelin Collado at ECollado@council.nyc.gov.
In Solidarity,
Council Member Ydanis Rodriguez